As one of the most famous cities in the World, New York is packed to the brim with famous architecture and landmarks. From the Empire State Building to Times Square, it’s estimated that over 60 million tourists visit the city each year to take them all in. But how would New York look if its landmarks were different? To find out, we’ve unearthed plans for four of the Big Apple’s most ambitious construction projects that never saw the light of day. Bringing the designs to life with the latest 3D rendering techniques, we reveal the most jaw dropping designs that would have completely changed the face of the City of Dreams. This is the New York that could have been…

With the aim of bringing air service right into the heart of New York City, eliminating, “the necessity of limousine travel to and from existing airports”, the proposed airport would have stretched a whopping 144 blocks from 24th to 71st Streets and from Ninth Avenue to the Hudson River.

Designed by the brainchild of property and real-estate mogul William Zeckendorf - who at the time owned the famous Chrysler Building and the Astor Hotel – The Midtown Manhattan Airport would have sat 200 feet above street level and had piers and docks for commercial and passenger ships to anchor.

Of course, a project of that size doesn’t come cheap and the estimated construction cost was a staggering $3 billion. Calculating for inflation, that’s the equivalent of $39 billion in today’s money – more than double the reigning most expensive building in the world, Abraj Al Bait in Mecca, Saudi Arabia.

Despite the eye watering cost, Zeckendorf was confident that the airport would pay for itself within a mere 55 years, thanks to the level of rental income generated by the many retail units, restaurants and companies that would have occupied the space beneath the landmark runway.

This wasn’t the only inner-city airport that was proposed around this time. As we reported in the London That Could Have Been, plans were drawn up for an airport right next to the Houses of Parliament in Westminster, London. Great minds think alike? 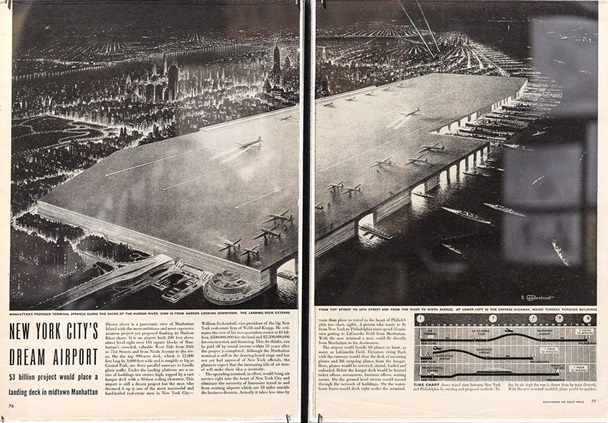 Click the image below to see how New York would look today, had Zeckendorf’s proposal been given the green light:


At the turn of the 20th Century in America, civic centres were in high demand but there was a perceived lack of them in New York.

In the March 1902 edition of Municipal Affairs, ex-congressman John De Witt Warner bemoaned the lack of civic centres that he saw as key to upholding New York City’s vigour and character.

Around the same time, inspired by the ‘White City’ structures showcased in the World’s Columbian Exposition of 1893 and the popular City Beautiful Movement, American architects were keen on replicating the style of the acropolis of ancient Greece and the neoclassical principles of symmetry, splendour and balance.

George’s design would truly have been a sight to behold. With the Municipal building stretching over seven blocks long and standing at a height of 6oo feet; without any buildings to surround it the civic centre would have been a permanent and historic landmark in the city.

Here is what Thomas J. George’s design looked like: 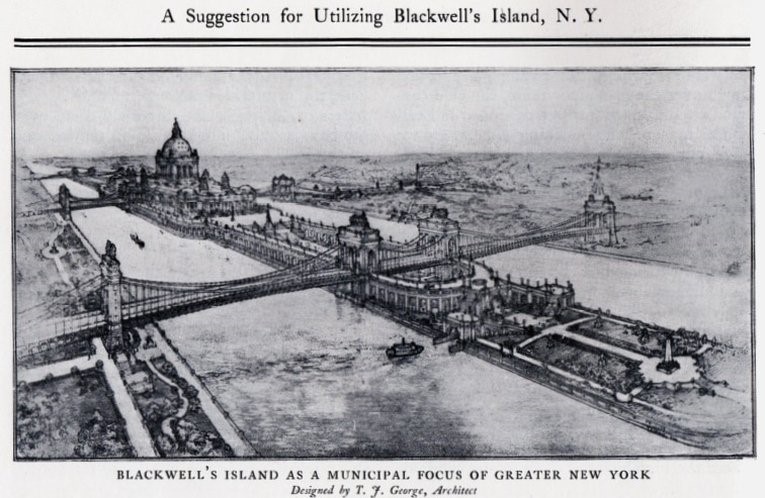 Click the images below to see how Roosevelt Island would look today, had George’s design been given the go ahead:


As John De Witt Warner raised concerns' about the lack of civic centres in New York, in January 1845, the Broadway Journal complained about the lack of commemorative monuments, writing, “There is not probably another city in the world of the size of New York, which cannot boast a single monument erected to commemorate some event in its history”.

Ironically though, there were plans for a monument the city had been trying to build since 1822, and it was the Broadway Journal that was the most vocal in raising opposition to it.

The commemorative monument they were so against was Calvin Pollard’s proposed George Washington Monument. Officially approved by the City, the monument was to be a massive 425 feet high, located within Union Square and had an estimated build cost of $400,000.

Built from Granite and of Gothic style, the tower would have been almost double the height of any other building in the city and would have contained over 400,000 books within its library.

The second floor was to house a statue of George Washington holding the Declaration of Independence, surrounded by La Fayette and other foreign allies.

It’s unclear why the Broadway Journal was so against the design, but it won its war as Pollard’s proposal was never constructed due to objections over the design and a lack of available funds.

On the 4th of July 1856, the subtler bronze statue of George Washington on horseback, sculpted by Henry Kirke Brown was unveiled. If you pay a visit to Union Square you can see it where it still stands today.

Here is Pollard's design proposal for the George Washington Monument: 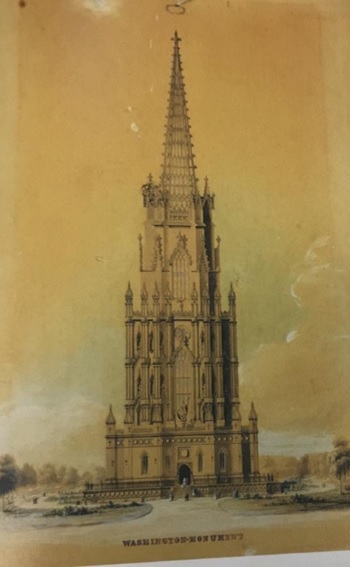 Click the images below to see how Union Square would look today, had the design been given the go ahead:

Drawing 50 million visitors each year, Times Square attracts more tourists than any other US attraction. Hailed as a retail and entertainment powerhouse, there are now laws in place that require buildings within the district to have a minimum amount of display lighting to maintain the area’s credentials as a ‘Tourist Mecca’.

But as recently as the 1970’s, life in Times Square was completely different. Crime ridden, seedy and a ‘swamp of sin’, in 1984 the Municipal Art Society and the National Endowment for the Arts (NEA) launched a competition for alternative ideas that could a) regenerate the square and b) provide a more visually striking design than the incumbent redevelopment plans of Johnson and Burgee, heavily criticised for their monotony.

Offering a $10,000 prize for the winner, the competition received more than 500 entries ranging from the classical to the bizarre.

Of all the entries, George Ranalli’s proposition was perhaps the most striking: A totem-style tower featuring a sphere nestled within the body and stepped pyramidal forms at the very top. The building was intended to reflect the theatrical and eccentric nature of Times Square. 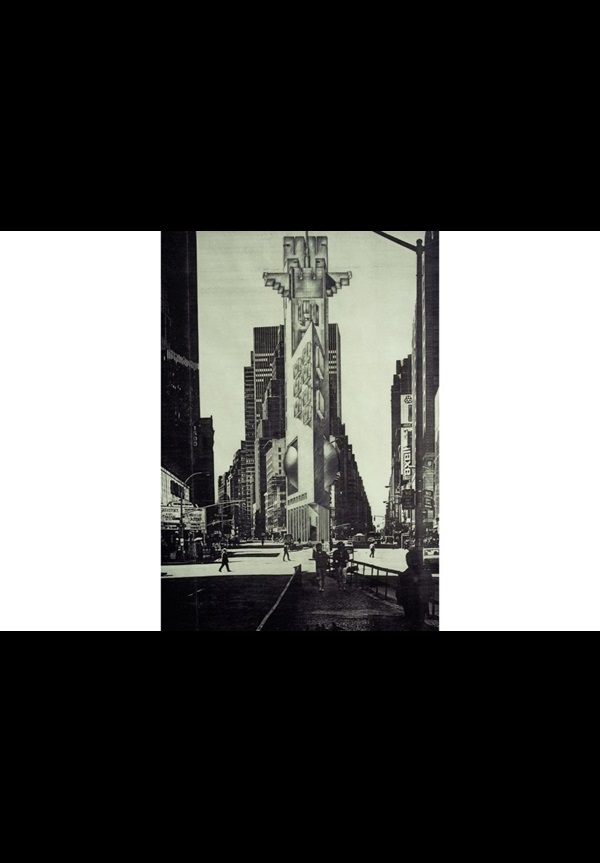 Click the image below to see how One Times Square would look today, had the design been built:


At Barratt London you will find great new build homes in amazing locations around the capital. Head to our Home page and use the search bar to explore all available developments. Browse available plots at the closest developments to Central London and new homes in North London, and don't forget to take a look at our offers to see how we can help you move, including Help to Buy London.