In Pictures: The London That Could Have Been

As the capital city of England, London has some pretty iconic architecture and landmarks. From Big Ben to the Tower of London, it’s estimated that over 20 million tourists visit the city each year to take them all in, not to mention the 8.1 million people who
live in London currently and get to enjoy them day-in day-out.

But how would London look if these landmarks were different? To find out, we’ve unearthed plans for some of the capital’s most ambitious construction projects that unfortunately never saw the light of day. Bringing to life plans for new transport infrastructures, alternative landmarks and lost buildings, we’ve showcased five of the most jaw dropping designs that would have completely changed the landscape of London.

This is the London that could have been…


Given the current traffic problems in the capital, it’s a shame this one was never given the green light. In the late 1960s, bus use within the city was on the decline, with residents of London preferring to commute via personal vehicles, causing congestion.

As the buses were mostly empty vessels taking up valuable space on the road, the plan was to get rid of them altogether, with the Central London Monorail taking over public transport duties.

Here is a designer's sketch of what the monorail would have looked like. 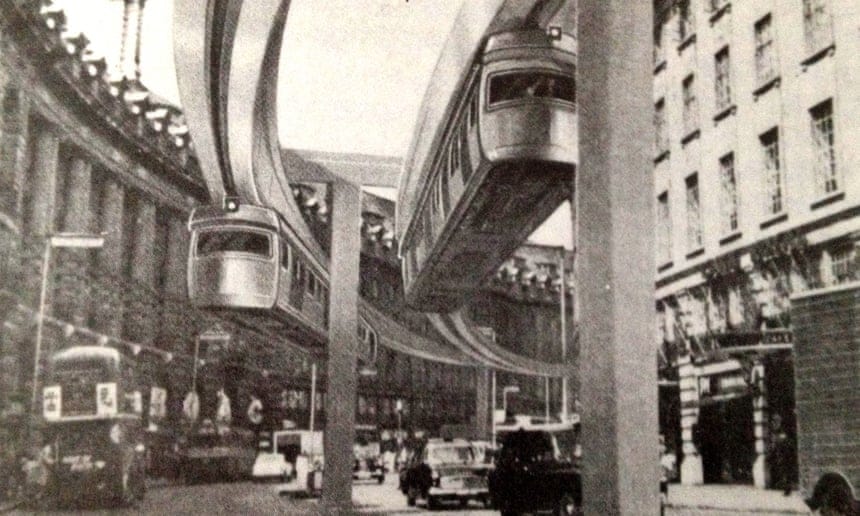 Click the image below to see how Regent Street would have looked had the Central London Monorail been built.


Back in 1934, plans were drawn up for an airport above the River Thames to provide London with a new transport hub in the heart of the capital – ideal for national and international business travel.

As the design from Popular Science Monthly (1934) illustrates, this airport would have been situated right next to the Houses of Parliament, in between Westminster Bridge and the relatively new Lambeth Bridge. 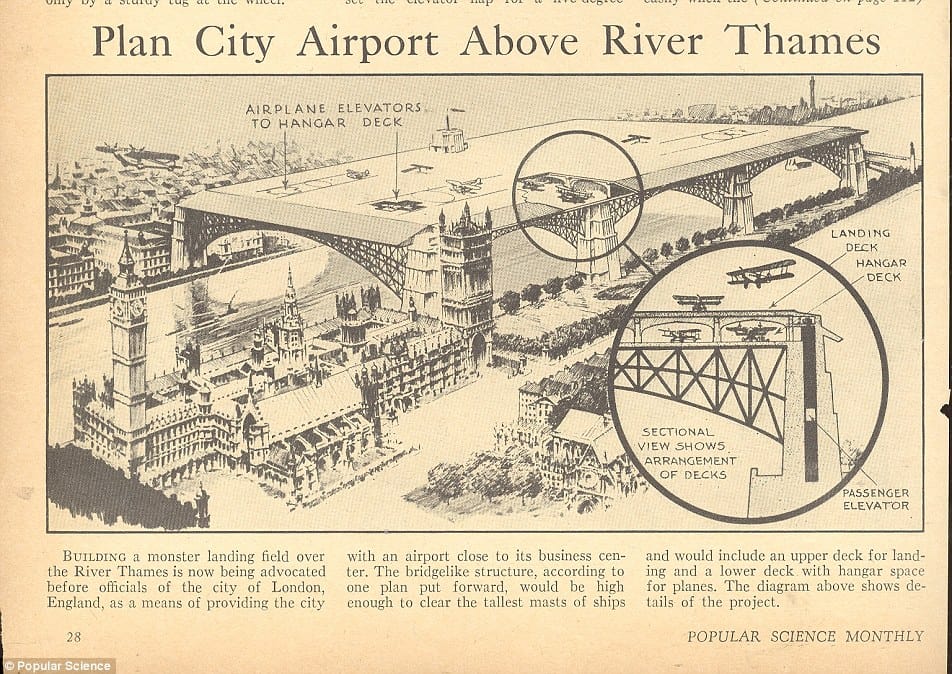 According to the project specifications, the airport would have been tall enough to accommodate the, “tallest masts of ships” (p28 Popular Science Monthly) and long enough to land a single propeller aircraft.

Additional aircraft and fuel storage would have been housed underneath the runway, with the upright support pillars containing elevators to enable travellers to reach the ground safely after landing.

For the purpose of this design we have made a couple of modern upgrades. Given the proposed runway was rather short, we have taken inspiration from contemporary aircraft carriers and added a ramped runway to aid take offs. Furthermore, to make full use of the River Thames, we’ve also added a riverside check in lounge for those wanting to beat the traffic and enjoy a luxury waterside reception.

Click the images below to see what Westminster would have looked like, had the airport been built.


Approximately two hundred years ago, plans were put in place to build a 300ft pyramid right in the centre of London to commemorate the victories of the Battle of Trafalgar and the Battle of the Nile. Blueprints for the monument reveal that the building was to be taller than St Paul’s Cathedral, with 22 steps paying tribute to each year of the two Anglo-French wars.

While no specific location was marked for the monument, it was decided that the top end of Whitehall would be suitable. As it so happens, in the 1820’s this land was cleared to make way for what we now know as Trafalgar Square…

Here is the original sketch of the proposed monument. 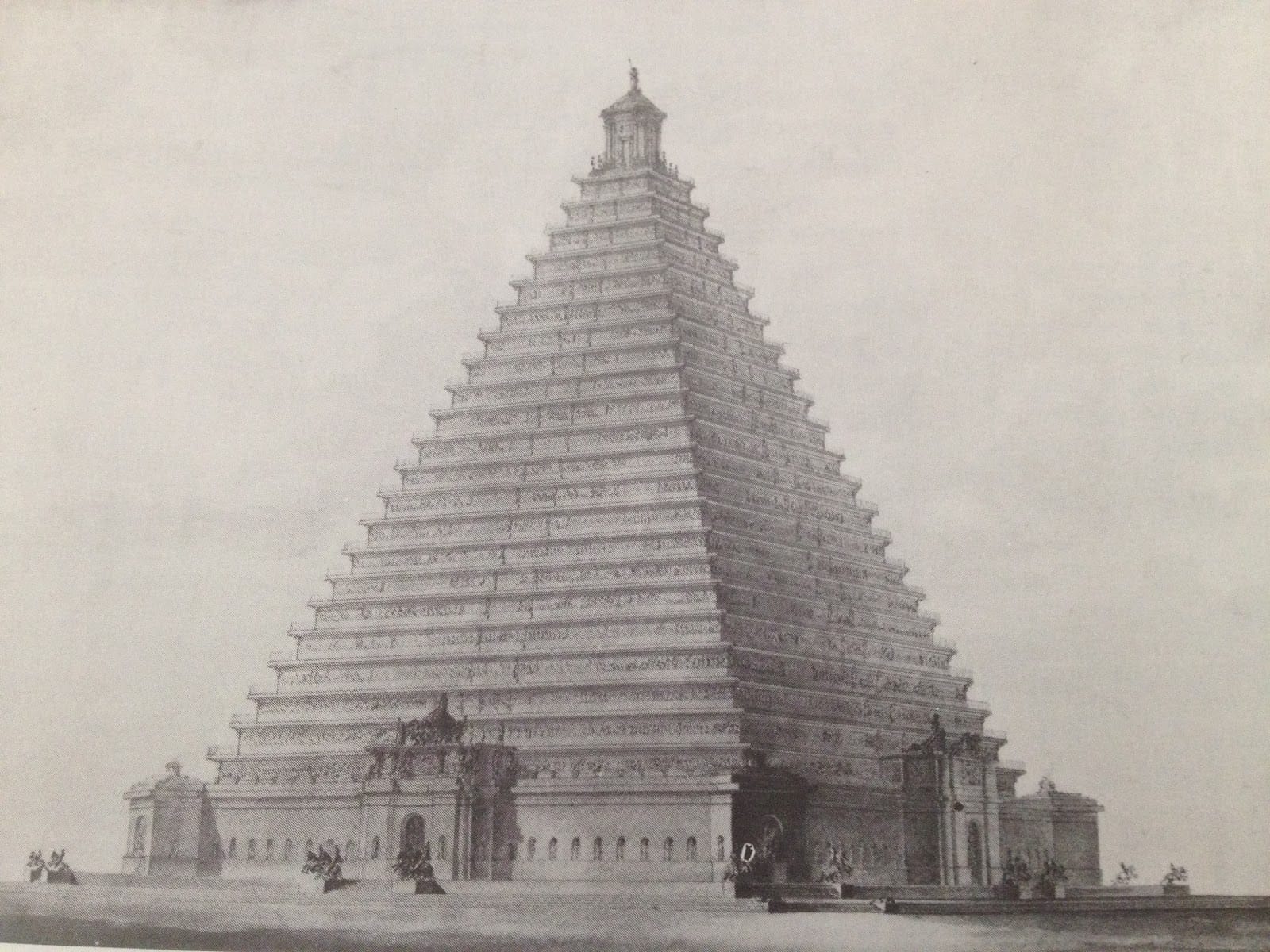 Click on the images below to see how Trafalgar Square could have looked.


The Carlton Hotel was a luxury establishment, leaps and bounds ahead of its competitors - the most notable of which being the world-famous Savoy Hotel.

The building that now stands in its place is the High Commission of New Zealand – an overseas post of the New Zealand Ministry of Foreign Affairs and Trade.

Here is an archived photograph of the Carlton Hotel in London. 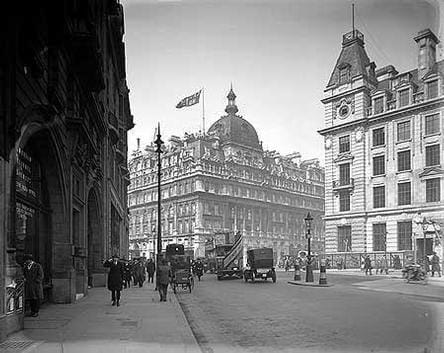 Click the image below to see how the street view could have been, had the building not suffered damage during the Second World War.


In 1851, in the midst of a manufacturing boom, England hosted the Great Exhibition in Hyde Park to showcase over 100,000 revolutionary and contemporary creations to its trading partners from around the world. All housed in a huge temporary structure made of glass and iron, the building became known as the Crystal Palace.

Once the Exhibition finished, the building was relocated to Penge Place in Sydenham (since renamed to Crystal Palace Park) where it stood until 1936 when it was destroyed in a catastrophic fire.

However, before the Crystal Palace was moved to Sydenham, an alternative proposal was put forward on what to do with the huge amount of glass and iron. Charles Burton pitched a 1,000ft skyscraper not too dissimilar in design to the modern skyscrapers we see today.

As this structure would have been the same height as The Shard, a vertical railway was proposed to carry visitors to the top and back down (what we now think of as an elevator).

Fortunately the skyscraper was never built, as modern architects believe that the building would have most likely collapsed under its own weight.

Here is an artist's illustration of what the monument could have looked like. 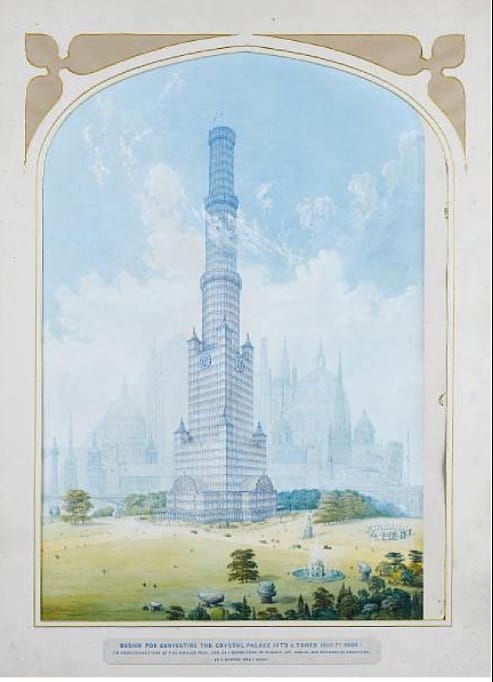 Click the image below to see what Crystal Palace Park would have looked like, had the design been given the go-ahead.


You can buy a property in London with Barratt with Help to Buy London with 40% equity loan, 55% mortgage and just 5% deposit. Available on new build properties up to £600,000.

View all our available developments around the capital here. Browse for available homes & apartments from one of our developments in Central London, Westminster, Croydon, Lambeth & Southwark.