Our analysis of information from the Office for National Statistics has helped us see where people are relocating to domestically across England, Scotland, Wales and Northern Ireland. The data, which includes 1.2 million moves from 2016, highlights that more people relocated from London than moved to the capital. It also shows that younger people are the most mobile demographic and that more people are moving to the South East than any other UK region, with the “home counties” having the highest turnover of homeowners. 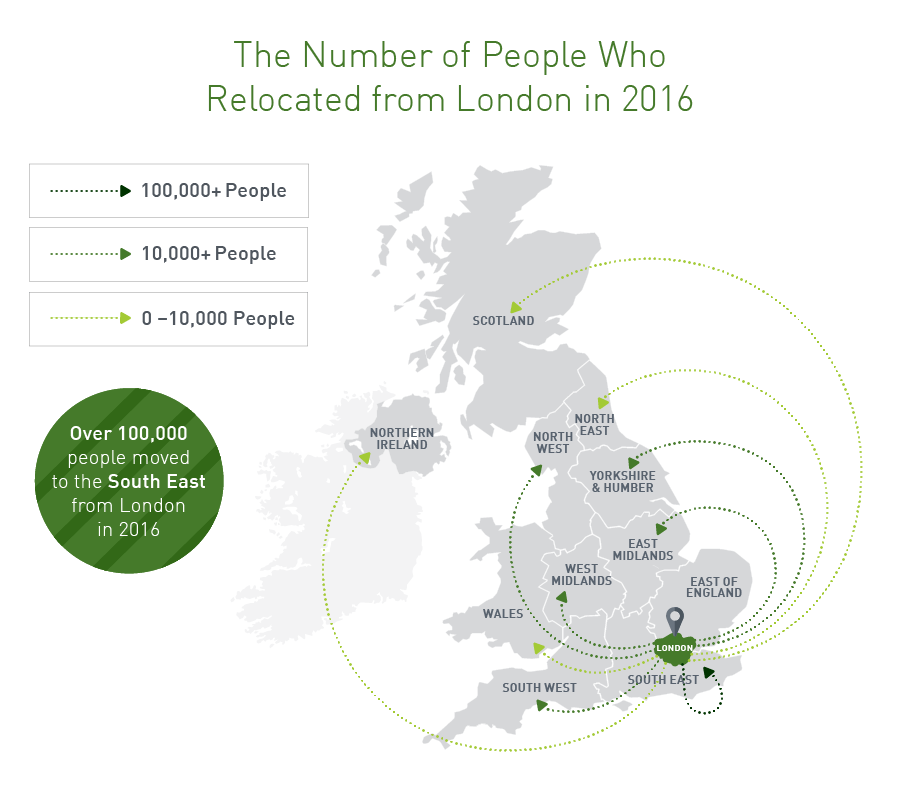 The capital was the only UK region to record a negative net relocation (see ‘Net Relocation of People in England and Wales’ table below), with resident numbers falling by more than 93,000 up to the year-end. The 2016 ONS data shows where people relocated to and from, and allowed us to look in further detail at the trends around different age groups and genders.

The South East is growing quickly


During 2016, The South East had the highest inflow levels, with just under 240,000 moving there – 110,180 of those people moving from London, making a move to the leafier home counties. Londoners leaving the city may be seeking better value and larger properties in the likes of Berkshire, Buckinghamshire, East Sussex, Kent and Surrey, while still benefiting from good commuter access into the city.

Young people are most mobile


The most prolific movers are those aged between 20-24, with more than 300,000 relocating during 2016. This age group also represents the highest single growth area, with a net increase of 25,870 20-24-year-olds moving into London from other regions. Lifestyle plays a huge part here – career-motivated younger people are likely to relocate to London for job opportunities in The City of London, or technology hubs surrounding areas such as Old Street Roundabout.

Let’s compare new or young families, such as 30-34-year-olds, who are statistically more likely to be having children. This demographic decreased by 16,850 in London. Compare this to the influx of young professionals, we see a pattern of different age groups moving in opposite directions for different reasons.

Looking away from the capital, the East Midlands had a net loss of 6,500 20-24-year-olds, while the North East lost 3,510. The North West, characterised by busy cultural and educational hubs Manchester and Liverpool, stayed fairly level and saw a net increase of just 460 for this age group. 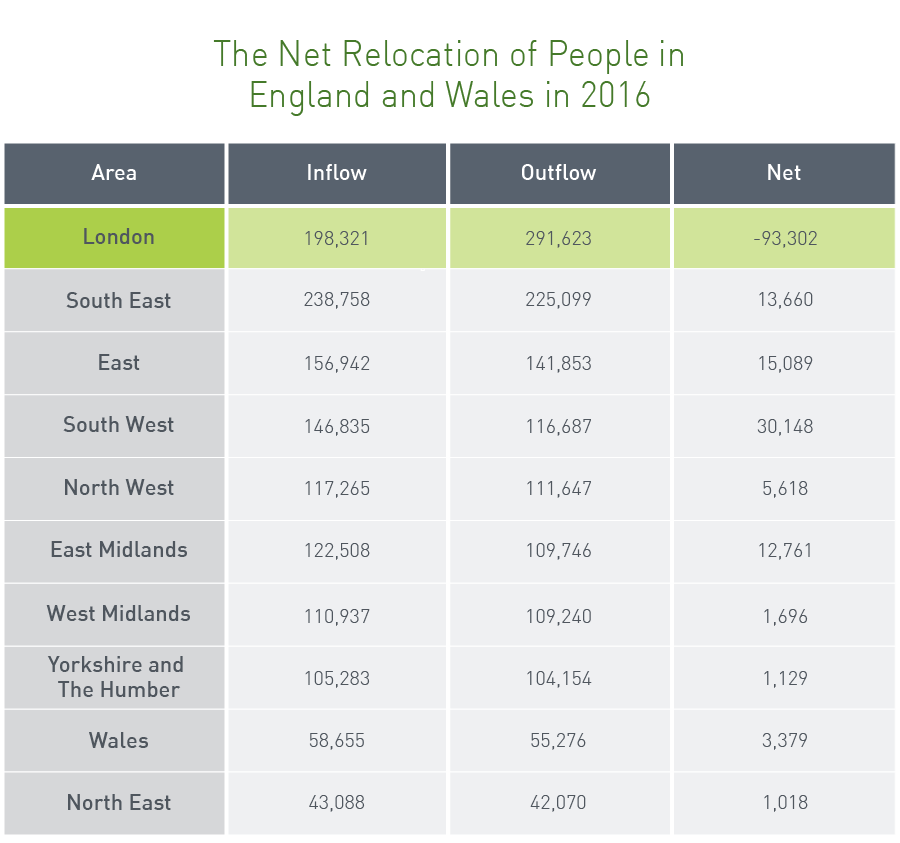 
Understandably, London experienced the highest number of relocators in 2016, with 291,623 London residents deciding to relocate from the capital, contributing to a net loss of over 93,000 residents. However, despite moving away, the majority decided to stay relatively close and relocate to the South East. Over 30,000 more people moved to the South East than to Eastern counties such as Bedfordshire, Cambridgeshire, Essex, Norfolk and Suffolk.


The South East had the biggest influx of residents as people relocated to the areas just south of the capital. The region also had the second highest outflow as 225,099 residents decided to relocate. The inflow and outflow statistics show a region with an extremely high turnover of residents.


The South West, which is the UK’s largest geographical region, saw the highest net increase with 30,148 people relocating to either Gloucestershire, Bristol, Wiltshire, Somerset, Dorset, Devon, Cornwall or the Isle of Scilly.


Surprisingly, there was a steady net relocation of young people moving to the North West, with 61,000 people moving away and 63,000 moving to the area dominated by Manchester and Liverpool – a striking contrast to the trends seen in both London and the South East, where there were higher outflows and inflows respectively.

We used ONS data of more than 1.2 million home moves. This paints a picture of a country where young people are still on the move yet, overall, residents are likely to relocate to a neighbouring region, rather than up sticks and move to the other side of the country.