The Hotel of Mum and Dad

How much are parents charging boomerang kids to live at home?


We’ve all heard of the Bank of Mum and Dad, but not only are parents supporting their children they’re also playing the role of landlord when their offspring decide to move back home. That’s what we’re calling the Hotel of Mum and Dad.

Whether they’re saving for a house deposit or trying to get back on their financial feet, moving back home comes with a bundle of monetary benefits – but how does the cost of boomerang kids impact lifestyle, savings and retirement? How much are parents really charging their children to live at home? And how much are kids saving by staying under their parent’s roof?

Our research shows clear support for charging children to stay at the hotel of Mum and Dad, but that the cost differs markedly up and down the country.

Which UK cities charge the most to live at home?


By surveying over 1,000 parents with boomerang children living at home, we found that 98% of parents believe kids should definitely contribute to the household spending.  One in four parents state they should contribute financially no matter what, with the rest believing it should only be the case if the child has a form of income.

Interestingly, over half don’t actually charge their child anything at all.

Our research also suggests parents in the UK have many different views when it comes to the ‘right amount’ to charge for rent, bills, food and toiletries. There is a clear north-south divide, as parents in Southampton are charging the most at £139.75 per month, whilst parent-landlords in Sheffield are charging the least, asking for a mere £77.95 per month. 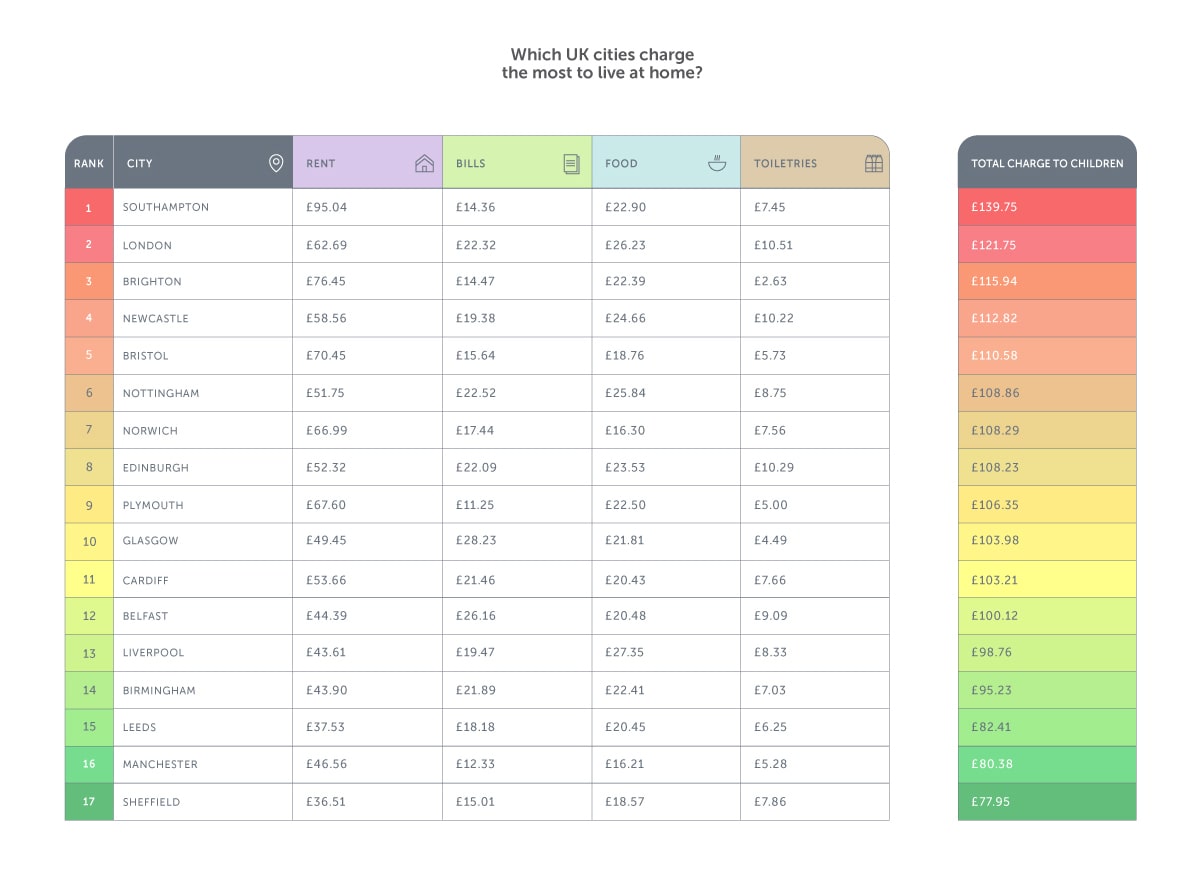 Overall, to cover the cost of having their children living back home, parents outside London are charging their children a modest £55.92 a month in rent on average, plus £18.74 towards bills – not including food – which adds a further £21.54 to their total household contribution.

An additional one in five parents also charge their children for household toiletries like toilet roll and toothpaste, that they would otherwise use for free, which adds £7.10 to their outgoings.

This suggests the boomerang generation, living outside of the capital, are saving an average of £489.26 per month in total.

That equates to £5,871.16 in their pockets each year, which could help to pay off student loans and other debts, or pay towards a house deposit of their own.

That’s more than half of a 5% house deposit on the average UK property price* (£228,147), suggesting it would take at least two years of living at home to save the full amount – and that’s supposing boomerang children don’t put away any further funds in that time.

Who’s saving the most by living at home?


Comparing these figures with the average cost of rent and bills in a shared two-bedroom apartment in that region, we identified how much millennials are saving by moving back home and in many cases, it’s a rather impressive monthly saving.

In London, clearly the most expensive place to live in the UK, that figure reaches a whopping £17,233.44, where parents charge a mere 8% of the average living cost in the area.

Are more affluent households offering additional support to their children?


In addition to filtering by city, we also analysed how household income changes the way parents charge. You might expect parents with higher joint salaries would be more likely to support their child free of charge, but that’s not the case, as those earning over £75,000 per year actually charge the most, asking for an overall sum of £132.45 per month.

That tots up to just £1,589.40 over the course of a year, which might not sound like a lot but remains  £350 more than the average UK household is charging their boomerang kids. 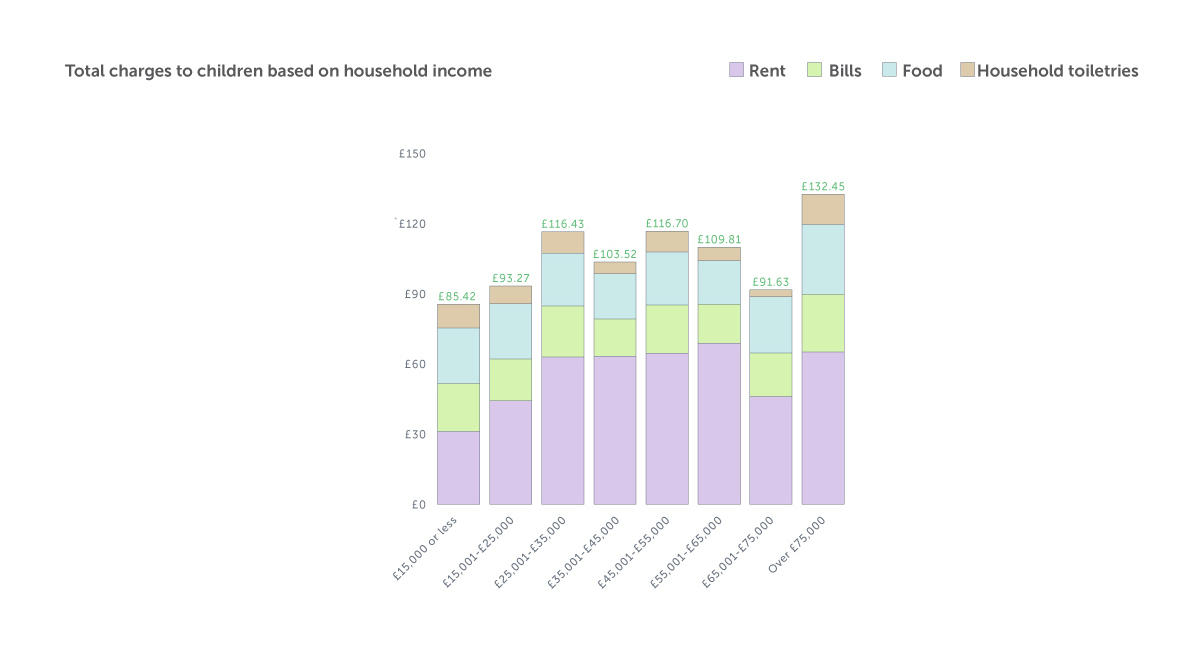 If you’re saving for a house deposit, we're proud to create homes that are built to last and encourage modern family life. Take a closer look at some of our most popular developments around the UK, from Somerset, Newcastle to Glasgow – we’re sure to have the perfect home for you .

Thanks to our homebuyers, we've been awarded the maximum of 5 stars from the Home Builders Federation for the 10th year in a row - so you can buy with confidence.